At the beginning of April, secretly and without photographers, the wedding of Richard Gere was celebrated with the Spanish businesswoman Alejandra Silva. Neither the distance, nor the difference of 33 years that exists between them, meant an impediment to a relationship by which some media have come to baptize Silva as the Spanish Pretty Woman. The nickname was an easy resource that does not exactly respond to the situation of the spouses, who are celebrating a family party at their home in New York this weekend to celebrate their bond.

Neither Richard Gere is at the moment an actor in the crest of the wave as compared to the almighty entrepreneur Richard Lewis, who gave life in the film, Alejandra Silva has nothing to do with Vivian Ward, of whom Lewis becomes enamored Pygmalion.
The actor has found in Alejandra Silva, according to her own words, a quiet and happy life. "That I always looked for," he told the press. The one who is already his wife found in him the calm and the love in a "moment in which she was very lost". Just after having gone through a bitter divorce of billionaire businessman Govind Friedland, whose fortune is estimated between 670 and 770 million euros, according to sources, and with whom he has a son, Albert, seven years old.

Now the couple It opens a new stage as a family in New York, the city where Gere lives habitually and where Silva has just transferred his residence and schooling his son, after selling for almost 1.2 million euros his villa of 341 square meters in the Madrilenian colony Fuente del Berro, where the actor was installed in his increasingly frequent visits to Spain. Where he enjoyed walking around Madrid, the tranquility of the countryside when they visited the Segovian farm of Alejandra's father and the many solidarity projects in which the actor and his girlfriend participated.

Richard Gere, who is now 68, stood out in the cinema of the 80s and 90 with films like American Gigolo, Officer and Gentleman, Days of Heaven and, above all, Pretty Woman . In fact the actor has always taken his fame with humor apologizing to his fans for the time they have lost watching him on the screen. It was the best paid, the sexiest, the heartthrob liked audience of all ages and that even today each of their increasingly scarce premieres comes accompanied by praise for his work. A career, like a life, with which he did not step up the scandal. Paraphrasing his words, a calm and happy trajectory. Now, her third marriage, will not change their habits.

"Fame is worth nothing, there is nothing good in it, the good thing is what you can do with it," he confessed to EL PAÍS a few years ago. It is his life philosophy, the one that has led him to amass a fortune that was estimated at 207 million euros, real estate like a house in the Hamptons - that paradise by the sea of ​​the American East where high society and intellectuals congregate New Yorker looking for sun when looking for a sun that does not burn- or a boutique hotel, which he preferred to call ecological residence and where he embarked with his previous wife, model and girl Bond, Carey Lowell. The same with whom his divorce, which ended in 2016, meant that he would fly almost half of the amount in which his assets were encrypted.

But as the interpreter has assured, by Hommer, his only son, he gives everything . "He's a mirror, like any other father, in my son I see the good, the bad, the frustrations, the joys, the anger, the blessings, in him I can always see myself, and he can see me, I'm never as vulnerable as his side ", he said about the young man who is now 18.

With this strong parental feeling, the new couple formed by the actor and Alejandra Silva (35 years old) does not rule out having more offspring in the future; In fact, they were recently seen leaving a fertility clinic in New York. The age difference has never been a problem for Gere, who was married for the first time to the top model Cindy Crawford, when he was 42 and she was 25; and then contracted marriage with Carey Lowell whom he was 11 years old.

The interpreter has said it many times: he does not look like a rich man. He lived a childhood in which money was not part of the conversation. He never left him but he did not lack and so he continues behaving. "I've never made a blockbuster of a hundred million dollars, only films that I feel are worthwhile, I have not changed in that," he declared in this new phase of his career. A supportive actor, friend of the Dalai Lama, daily practitioner of meditation before it became fashion, his humanitarian work has been progressing over the past years and has also been the link that joined him to his current partner. Beyond defending the freedom of Tibet, a cause that made him persona non grata in China and damaged his professional career, the foundation that bears his name, and in which Alejandra Silva collaborates actively, has extended his humanitarian work to the struggle Against AIDS. The actor has also become an agent of change in the crisis of the homeless, advocating for a fair housing and a social impulse that serves to support what they have lost the most basic: a place to live. Hence his work with the RAIS Foundation, dedicated to the homeless, who also loves his current wife.

Gere, who declares himself a Buddhist, has already said that it was karma that united them and Alejandra. "You know what shunya is, empty in Sanskrit, and that's what I like to be, someone empty of myself and who can be anyone," he said a year ago. This is also the name of the intermediary company that Alejandra Silva created in August 2015, Shunyata SL (what does not exist, what is unsubstantial), a basic term of Buddhism that united a businesswoman and an international actor and whose story seems to be an argument of one of the many romantic movies that Richard Gere has starred throughout his career.

The actor, who declares himself a Buddhist, has already said that it was karma that united them Alejandra and him. "Do you know what it is shunya ? Empty in Sanskrit. And that's what I like to be. Someone empty of myself and I can be anyone, "he said a year ago. From the same word derives the name of the intermediation company that Alejandra Silva created in 2015, Shunyata SL (what does not exist, the isustancial), a basic term of Buddhism that united an entrepreneur and an international actor and whose history seems like a argument from one of the many romantic films that Richard Gere has starred. With the transfer of the couple to New York, Alejandra Silva will continue to be involved in her husband's solidarity work and in her role as international ambassador for firms such as Loewe. On the other hand, the place of his new residence has also been possible thanks to the new tone of tranquility that has been imposed in the relationship with the father of his son, who owns a private plane and with businesses in various parts of the world, see in the American city a good place to be able to see Albert regularly.

Previous After seven months, Gago played soccer again
Next With Dybala's goal, Juventus already has the seventh titles in their hands

Legend of Spanish television, has maintained a great presence in the media until the end … 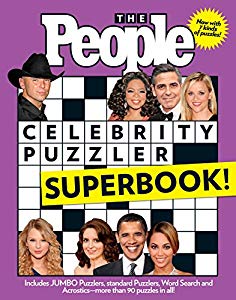 by The Editors of PEOPLE for $11.99 $10.79 New from $8.46 Used from $5.60
First came the Puzzler book. Then came the JUMBO edition. Now, from the same pleasantly-warped puzzle makers at PEOPLE comes the CELEBRITY PUZZLER SUPERBOOK. More than 100 celebrity-based puzzles, including PEOPLE's famous Puzzlers, plus acrostics... read more
(as of May 5, 2018 10:38 pm - More infoProduct prices and availability are accurate as of the date/time indicated and are subject to change. Any price and availability information displayed on [relevant Amazon Site(s), as applicable] at the time of purchase will apply to the purchase of this product.)
$124.84 $47.63

for $124.84 $47.63 New from $47.63
America's Most Popular Magazine. Defining celebrity, driving conversation and inspiring action. We're America's trusted connection to the people you want to know and the moments that shape their lives.Stay in the know with one of the most widely reco... read more
(as of May 5, 2018 10:38 pm - More infoProduct prices and availability are accurate as of the date/time indicated and are subject to change. Any price and availability information displayed on [relevant Amazon Site(s), as applicable] at the time of purchase will apply to the purchase of this product.)